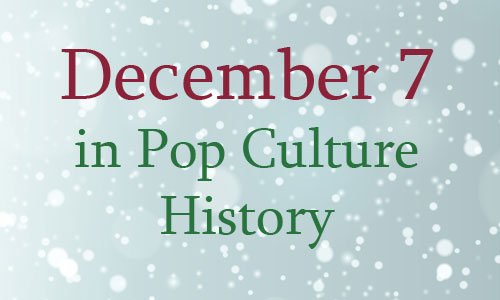 1787 – Delaware became ‘The First State’ to ratify the US Constitution.

1909 – Leo Baekeland of Yonkers, New York, received the patents for a thermosetting artificial plastic which he called ‘Bakelite’ (patent #942,699)

1990 – Edward Scissorhands was released in theaters.

1995 – The Galileo spacecraft arrived at the planet Jupiter on it’s mission to study the planet and it’s moons.

2002 – In Amsterdam, Netherlands, two Van Gogh paintings were stolen from the Van Gogh Museum. The two works were “View of the Sea st Scheveningen” and “Congregation Leaving the Reformed Church in Nuenen.” They were found, along with the thieves shortly after the heist.

2007 – The Golden Compass debuted in theaters.