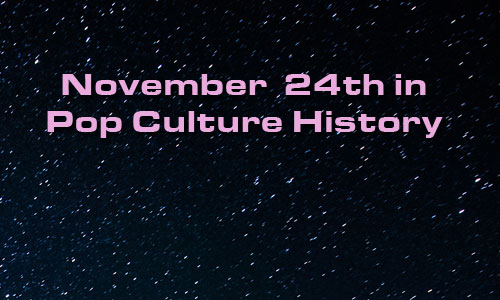 1639 – First observation of transit of Venus by Jeremiah Horrocks and William Crabtree – helped establish the size of our Solar System.

1859 – Charles Darwin published On the Origin of Species. A first printing sells for around $100,000 today.

1896 – The first US absentee voting law (voting via mail) was enacted by Vermont.

1903 – The patent (#745,157) for an automobile electric self-starter was issued to Clyde J. Coleman of New York City. Prior to that, they were hand-cranked.

1950 – Storm of the Century – A snowstorm, took shape on this date before paralyzing the northeastern United States and the Appalachians the next day, bringing winds up to 100 mph and sub-zero temperatures. 353 people died as a result of the storm.

1954 – Air Force One, the first US Presidential airplane, was christened. It was the third of three C-121 Constellation airplanes, the “Columbine III.” A

1953 An incident where Eisenhower’s aircraft was “Air Force 8610” and an Eastern Airlines plane was “Eastern 8610” were in the air together created the need to devise a unique call sign.

1962 – The influential British satirical television program That Was the Week That Was was first broadcast.

1963 – Two days after the assassination of President John F Kennedy and murder of police officer J.D. Tippit, Lee Harvey Oswald was shot and killed by Jack Ruby, live on television while Oswald was being transferred to a county jail. Not what you’d expect to see on a Sunday morning. This was the first live murder on American Television.

1971 – Dan “DB” Cooper parachuted from a Northwest AL 727 with $200,000 in ransom money, somewhere over the Cascade Mountains, possibly over Woodland, Washington, in the Pacific Northwest area. He was never heard from again.

2013 – Iran signed an interim agreement with the P5+1 countries, led by Barack Obama and the United States, limiting its nuclear program in exchange for reduced sanctions.