Tower of Babel by Pieter Bruegel (Brueghel) the Elder

Tower of Babel by Pieter Bruegel (Brueghel) the Elder
There were actually three painted, the first,a miniature, was painted on ivory, and was lost, the remaining two (below) were completed in 1563.
The painting appears as the main element on one box art design of the video game Civilization III, and appeared in Call of Duty:Black Ops 2.
In 1559 Pieter dropped the ‘h’ from his name and signed his paintings as Bruegel. He often painted regular folks – peasants – and earned the nickname “Peasant Bruegel.”
The “Big Tower” 114 cm × 155 cm (45 in × 61 in): 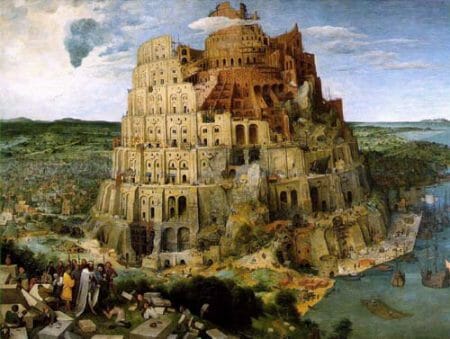 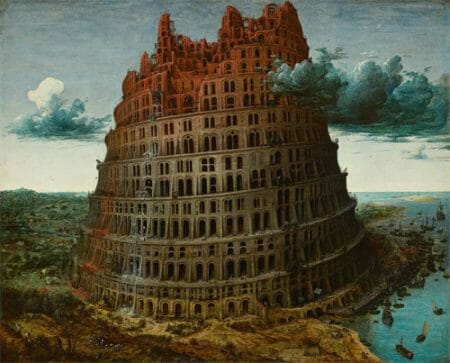 “Then they said, ‘Come, let us build ourselves a city, and a tower with its top in the heavens, and let us make a name for ourselves; otherwise we shall be scattered abroad upon the face of the whole earth.'” (Genesis 11:4).
The king with the white cape is Nimrod, the guy who ordered the tower to be built. His plan was to conquer the whole world, making all men speak the same language, under one ruler, Nimrod himself. God had other plans.
“And the Lord said, Behold, the people is one, and they have all one language; and this they begin to do; and now nothing will be restrained from them, which they have imagined to do. Go to, let us go down, and there confound their language, that they may not understand one another’s speech. So the Lord scattered them abroad from thence upon the face of all the earth; and they left off to build the city. Therefore is the name of it called Babel (Confusion); because the Lord did there confound the language of all the earth, and from thence did the Lord scatter them abroad upon the face of all the earth” (Gen. 11:6-9)