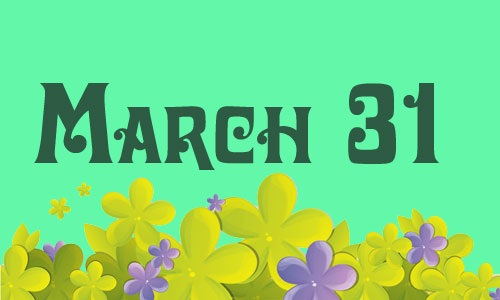 March 31 in Pop Culture History
1492 – Queen Isabella of Castille issued the Alhambra Decree, ordering her 150,000 Jewish and Muslim subjects to convert to Christianity or face expulsion.

1822 – The massacre of tens of thousands of people living on the Greek island of Chios by soldiers of the Ottoman Empire following an attempted rebellion,.

1836 – The Posthumous Papers of the Pickwick Club, by Charles Dickens, was published under his pseudonym, Boz.

1918 – The US began daylight saving time (DST) on Easter Sunday, when clocks were set ahead by one hour.

1930 – The Motion Picture Production Code was instituted, imposing strict guidelines on the treatment of sex, crime, religion and violence in film, in the US. It was in place until 1968.

1959 – The Dalai Lama, fled the Chinese suppression of a national uprising in Tibet and crossed the border into India, where he is granted political asylum.

1981 – A new single cell genetically engineered life form patent (#4,259,444) was issued to Ananda Chakrabarty. The Pseudomonas bacterium (now called Burkholderia cepacia) could be used to clean up toxic spills because it can break down crude oil into simpler substances that can potentially become food for aquatic life.

1985 – The first WrestleMania, the biggest wrestling event from the WWE (WWF), took place in Madison Square Garden in New York.

1994 – Madonna appeared on The Late Show with David Letterman and stirred up controversy by going on a profanity-laden tirade. It marked the most censored event in television talk show history with 13 swear words being censored.

1995 – Latina singer Selena was murdered and the live coverage of the crime drew in over 3.2 million views to CBS.