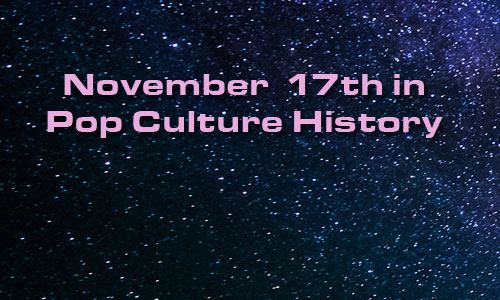 1558 – Queen Mary I of England died and was succeeded by her half-sister, The ‘Virgin Queen’ Elizabeth I of England.

1827 – The Delta Phi & Sigma Phi fraternities were founded at Union College in Schenectady, New York. Along with Kappa Alpha Society and Sigma Phi Society, the trio were informally called the ‘Union Triad’.

1855 – David Livingstone became the first European to see Victoria Falls in what was now present-day Zambia-Zimbabwe.

1894 – H. H. Holmes (Dr. Henry Howard Holmes), one of the first modern serial killers, is arrested in Boston, Massachusetts. He killed between 23 and 200 people.

1911 – Omega Psi Phi Fraternity incorporated, it was/is the first black Greek-lettered organization founded at an American historically black college or university, on the campus of Howard University in Washington, DC.

1968 – The NBC/NFL Heidi Game –  On November 17, 1968, in a Game between the Oakland Raiders and the New York Jets, ended with a JETS win 43 to 32. That happened by 7:07 PM. The problem was, NBC has scheduled and ran  the TV movie Heidi  at 7:00. There was still over a minute left to play, and the TV audience never got the chance to see two Raider Touchdowns in the last 65 seconds of the game.

1973 – In Orlando, Florida, President Richard Nixon told 400 Associated Press managing editors “I am not a crook.”