The Red Vineyard was painted in November 1888 by Vincent Van Gogh. It may be one of the few pieces he sold in his lifetime.

In June 1873, at 20 years old, he was working for the art dealing firm, Goupil & Co, who transferred him to London, where he lived at 87 Hackford Road, Brixton. He enjoyed the position until he was transferred to Paris. He was unemployed by 1876.

From 1877 through 1880, he studied theology with the hopes of becoming a Protestant minister. He was unhappy with several missionary posts, and his father even made inquiries about having Vincent committed to the lunatic asylum at Geel. 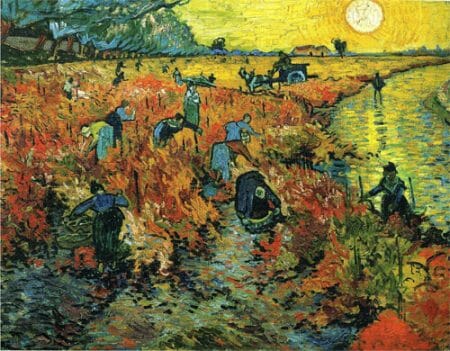