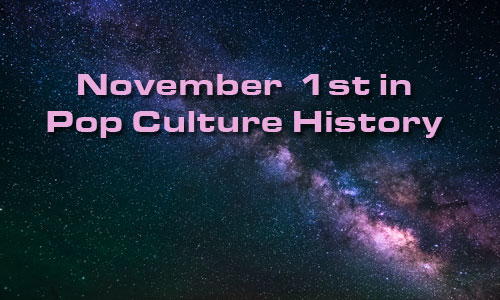 1512 – Michelangelo’s paintings on ceiling of Sistine Chapel in Vatican, Italy were first exhibited. He started the work in 1508.

1570 – The All Saints’ Flood devastated the Dutch coast.

1604 – William Shakespeare’s tragedy The Tragedy of Othello, the Moor of Venice was first presented.

1834 – First published reference to poker (as a Mississippi riverboat game) Originally 20 cards were used, and the 52 card deck appeared before 1850.

1884 – Greenwich Mean Time (GMT) was adopted universally at a meeting of the International Meridian Conference in Washington, DC.

1896 – Zulu groom and bride (a bare-breasted woman) appeared in National Geographic Magazine. The magazine began publication in October of 1888.

1924 – First US NHL franchise, Boston Bruins was founded. The Montreal Canadiens and Toronto Maple Leafs were the first to form and addition of the Chicago Blackhawks, Detroit Red Wings and New York Rangers made the Original Six teams.

1960 – While campaigning for President of the United States, John F. Kennedy announced his idea of the Peace Corps.

1977 – Chiron, the farthest known asteroid was discovered by Charles Kowal. Chiron is named after the wisest of the Centaurs of Greek mythology.

1979 – Federal (US) government made a $1.5 billion loan guarantee for Chrysler. The government basically ‘cosigned’ a loan to keep the company in business.

1981 – First Class US Mail raised from 18 cents to 20 cents. Prior to the use of stamps, postage was paid for by the receiver, not the sender.

2012 – Google’s Gmail became the world’s most popular email (Electronic mail) service. Microsoft’s hotmail was the leader before that. Although Yahoo actually has the most registered users, it is/was not used as much as the others.
Save