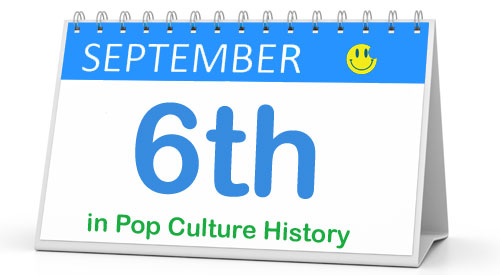 1620 – The Pilgrims sailed from Plymouth, England, on the Mayflower to settle in North America.

1866 – Frederick Douglass was the first US black delegate to a national political convention.

1943 – A Pennsylvania Railroad train derailed at Frankford Junction in Philadelphia, killing 79 people and injuring 117 others.

1972 – A German policeman and nine Israel athletes were taken hostage and killed at the Munich Olympic Games by the Palestinian “Black September” terrorist group.

1976 – Dean Martin appeared on Jerry Lewis’ 11th Muscular Dystrophy telethon. The pair had not spoken since the 1950s.

1979 – National Grandparents Day was proclaimed by President Jimmy Carter to be celebrated on the Sunday following Labor Day.

1983 – The Soviet Union admitted to shooting down Korean Air Lines Flight 007, claiming that it did not know it was a civilian aircraft when it violated Soviet airspace.

1991 – The Soviet Union recognized the independence of the Baltic states: Estonia, Latvia and Lithuania.

1991 – The name Saint Petersburg was restored to Russia’s second largest city, which had been known as Leningrad since 1924.

1995 – Cal Ripken, Jr. of the Baltimore Orioles played in his 2,131st consecutive game, breaking a record that stood for 56 years.

1997 – The funeral for Princess Diana was broadcast across several networks and around the world An estimated 2 billion people watched all or part of the funeral on television.